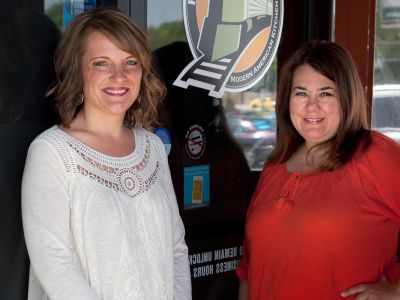 by Kathy Rygg – Edge Magazine
Innovation is often the result of need. West Omaha residents Leslie Fischer and Holly Baker recognized there was a big need in the way fundraising was conducted locally. It was becoming more difficult for schools to have students go door to door, and local businesses were flooded with donation requests from local charities. All of these organizations rely on fundraising, but it had become daunting. So the former co-workers joined forces to create a way to make it easier on everybody.

Holly and Leslie had worked together at a previous company, and Leslie said with Holly’s marketing skills, she knew they’d make good business partners. Together a Greater Good (TAGG), originally started as a website in 2012, with a voucher model similar to Groupon, which had recently launched at the time. Whenever someone made a purchase at a participating local business, a percentage of their purchase would be donated to a local organization that the consumer selected.

The partners started off slowly, talking to local businesses. They quickly learned how many donation requests businesses were receiving, both for money and products. “One of the first business owners we talked to validated our concept and gave us the confidence to keep moving forward,” Leslie said. Many of her friends with school-aged children mentioned how they were always asked to participate in a big school fundraiser once a year. “They all said they’d rather be able to TAGG their purchases for their schools and fundraise that way all year long,” she added.

In 2014, they revamped TAGG and changed it from web based to app based, launching the TAGG app in the fall of 2014. Users download the TAGG app for free on their smart phone. When they’re at one of the 160 participating businesses and restaurants, they track their purchase either by asking the businesses for their QR code to scan, or simply snap a photo of the receipt. Next, they choose one of the 400 local organizations listed. Finally, users are encouraged to share it on social media.  For each TAGGed purchase, 5% is donated by the business to the chosen cause, facilitated by TAGG.

What makes this model different from other donation programs is two-fold: most participants are local businesses, and all those being supported are local organizations. The other difference is that TAGG doesn’t require the use of debit or credit cards to automatically track a purchase. “Ours is a conscious process, rather than something that is generated automatically, possibly without thought behind it,” Leslie said. In fact, 75% of the 5,000 users who regularly TAGG share their efforts on social media. And the number of those who TAGG is growing by about 120 new users a week. Organizations can raise money as a whole, as sub-organizations or teams, or on an individual level, which is popular for youth sports.

Businesses have embraced this new form of giving. Jared Clarke, owner of Railcar Modern American Kitchen has been participating from the beginning. “Restaurants are often on a strict budget, and in the past we’d receive donation requests all at the same time of year,” he said. “TAGG helps us direct our funds across all organizations throughout the entire year. It takes pressure off of us, helps drive business, and makes it easier for everyone.”

With the TAGG momentum strong, Holly and Leslie are focused on continually adding local business participants. They also want to expand to other markets, and are currently pursuing Lincoln. But the ultimate success of TAGG depends on people regularly using it. “We encourage everyone to get involved, whether you are a parent supporting your child’s school or sport, or anyone willing to support a nonprofit simply by choosing our charitably-minded businesses,” Holly said. “I love that my daughter sees our signs at places we go and is excited to support her school. There’s so many great causes needing our support, and we want everyone to feel like they’re part of the greater good.”